If you’re a freelance designer, chances are  you end up playing creative director with a lot of your clients – project manager with some too, I bet. I know this is the case for Paper Leaf. With that in mind, to adhere to the above-mentioned three steps, you might have to be the one that gets the ball rolling; the one that starts the discussion about roles; the one that practices open & honest communication; the one that embraces the idea of trust. If you are a designer who works with a creative director or a project manager, hopefully they understand the importance of these three steps. If not, you may have to tread carefully and, again, be the one who gets the ball rolling.

All this said, why do these three steps matter? Let me explain. 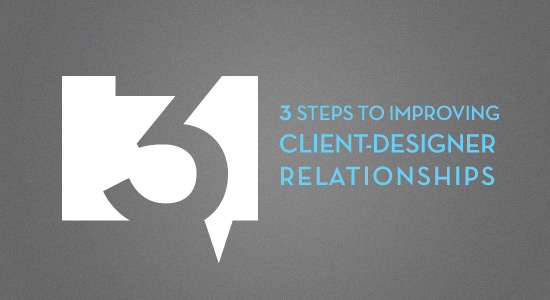 In the simplest of projects, the roles can be broken down into the following: client & designer. The client is the one needs design services for their business; the designer is the one who learns about this business and offers their design services. Seems very simple, doesn’t it? However, any designer will tell you that these lines can soon become blurry – usually in the form of a complaint from the designer that their client “wants to play designer” or that their client has demoted them to “pixel pusher” status. This happens, and it’s unfortunate. However, the reason it happens is largely due to the fact that the roles in the project were never clearly defined at the outset.

The client is in the role of the client, or business owner. But what does this role entail? Well, designers rely on clients to provide in-depth knowledge about their business, their target market, and their competitors. The client needs to offer design problems; not design solutions. If this role is defined and understood by both parties, then you are one step closer to a great design.

The reason I mention that the client needs to offer design problems, not solutions, is because it is easy to get the two confused. A design solution is, for example, “make the logo bigger” or “use Copperplate Gothic Bold” (shudder). A design problem, on the other hand, is “the branding isn’t quite strong enough on this poster” (a problem, whereas “make the logo bigger” is a solution – a bad one, usually – to this problem). Another design problem might be “the poster doesn’t seem aggressive enough” (where the client-proposed solution is “use Copperplate Gothic Bold”).

When the client starts making design solution suggestions, as opposed to design problem suggestions, two things usually happen: a subpar design is settled on, and the relationship is soured. Why does this happen? Because, in the example above, if the designer just does as the client asks, the end result will be a poster with an oversized logo set in a poor font. If the client had known to suggest design problems – and, on the flipside, if the designer had coaxed the problem out of the client, as opposed to just accepting their solution – the end result could have solved the problems properly and aesthetically without resulting to poor design decisions made by someone not necessarily well-versed in design.

On the other side of the coin, the designer needs to realize & respect the fact that the client knows their business and knows their clients – just like we expect clients to respect the fact that we know design, we know user tendencies and such. If the client has an issue with a design draft because they don’t feel it will effectively speak to their target market, we as designers need to listen to that, respect it, and see how we can improve our work. When both the client and the designer respect and understand one another’s role, it opens the door for effective, honest & open communication – the second step to improving client/designer relationships.

Once roles have been defined & understood, the next step is to embrace honest & open communication. So many designs have fallen short of their potential because either the designer or the client has been too reluctant to speak openly about the work. This is a fine art; there is a thin line between openness & honesty and cruel, blunt speaking. Be sure to tread that line carefully.

Why is this so important? Because, to be frank, nothing ever reaches its full potential if people involved aren’t speaking plainly. If you think your client’s idea is absolutely harebrained and will result in the equivalent of burning a small pile of cash, tell them openly. Don’t hint at it. Don’t just do the work, even though it may be an easier path to a paycheck. Think long term – if you know that this concept will not be effective, the client will not be happy down the road when their marketing campaign falls flat; in fact, they just might blame you. That’s a lot of future work lost because you, as the designer with the knowledge of effective design, were too reluctant to speak honestly. It might not be pleasant at the time to speak so plainly, but down the road when your hard work pays off & you have a design to be proud of along with a happy client, you won’t even remember the rough patch.

Likewise, encourage your client to be honest & open about their feelings when it comes to design concepts & drafts. Be careful to know the boundaries of one another’s roles, as mentioned above, but a client who feels they can speak openly will be a satisfied client (unless you fly into a chair-smashing rage whenever you hear something you don’t like – if that’s the case, you should probably change professions). Sometimes we designers can get really caught up in a design concept and lose our “fresh eyes” – when showing the concept to your fresh-eyed client, their honest feedback might very well be the key to catching an ineffective concept.

Learning to have an open & honest communication pipeline between client & designer will not only lead to better designs – it will lead to building trust.

Trust is the single most important part of a designer/client relationship. Trust is the also the hardest element in the relationship to earn, and rightfully so. However, if both you & your client understand one another’s roles and practice open & honest communication, you can build trust. Once you’ve gained your clients trust – and they yours – you will be able to design freely. Your client will trust your judgement because they know you respect their knowledge about their business; they know they can speak honestly to you about the project and you will respond in a professional manner.

Designing for a client who trusts you is pretty much the holy grail of design – when you & your client reach this stage, hold on to this client & don’t let go. Chances are this relationship will be a fruitful one for both parties: the client delivering to you lots of work, and you delivering to the client effective design that helps their business.

Strive for trust; this is the end goal and the final step to improving client/designer relationships. I know that we have some clients in whom we trust and that share the same feeling; I also know that these are the clients we love to work for. How about you?