Have the Next Big App Idea? Start Here First

We’ve all had it: that lightbulb moment for the next big app idea. Does this exist? Why hasn’t someone built this yet? Wouldn’t it be cool if…?

I get it – it’s exciting. All of us read TechCrunch and hear about how Uber is valued at $80B, and our heads subsequently explode, or how Dropbox was started by two guys and is now worth $9B. Why can’t my idea be next?

You’re likely reading this because you do have a tech idea that you think has value. It might even be the next big one – the next Uber, or Dropbox, or Instacart. When you’re at the point you’re at now, it’s exciting to move quickly and go find an app design firm to bring your vision to life. Trust me, we know – we get multiple calls a month from people with app ideas who are where you’re at right now. That’s why I wrote this post.

I’m here to tell you to pump the brakes.

Not because your idea is bad. Not because I like crushing dreams. I’m telling you to slow down because I want you to succeed, and because there is a ton of risk if you don’t take a few key steps prior to signing on with a product development firm.

Here’s a small sampling of what I mean when I talk about the risk that comes with racing ahead:

The One Where They Didn’t Check Regulations: We had a tech startup with an app idea drop $20,000 before finding out that the crux of their idea was not permitted by immovable fire code regulations.

The One Where The Idea Existed Already:I had to talk a guy with a young family out of spending his $100,000+ budget by pointing out his idea was Taskrabbit (except with quite literally 0.03% the budget) and unless he had a clear differentiator and VC backing to the tune of millions of dollars, he wasn’t going to succeed – and I wasn’t going to take his money.

The One Where the Idea Wasn’t Validated: I had a guy who had already spent over $150,000 with another software development firm – a not-insignificant portion of his retirement nest egg – on his party planning app. The app had no pickup because there was no idea validation prior to building the app, or customer acquisition strategy post-launch. He wanted us to take it over and continue pouring money into new features to try and spend his way to success. I recommended he stop spending his retirement money, and either find backers to fund a customer acquisition campaign or look at it as an expensive lesson learned.

The One Where the Hard Parts Weren’t Technical: One guy wanted to build a competitor to Instacart, and wanted to know how much it would cost (spoiler alert: lots), but hadn’t thought about any of the non-technical parts like: how to sign on grocery stores, how to track their inventory, how to attract and retain delivery personnel, or how the monetization model could work. I recommended he do some work on the business side before engaging with us, or any other software firm.

All of the above stories are, unfortunately, real.

The ones where people lost money? That could have been easily avoided by taking a few steps prior to engaging with a software development firm. The stories where people were talked out of spending money? Imagine how that could have gone, if they jumped right into a contract with a firm.

I don’t share those stories to dissuade you from ever pursuing an idea. I just want you to pursue your idea effectively so you have the best odds of success – because, as we well know, there are plenty of stories on the other end of the spectrum. The stories of software ideas that stick, and grow, and succeed.

With that in mind, here’s what I ask everyone with an early stage app idea, and what I tell everyone to do if they don’t have the answers yet. 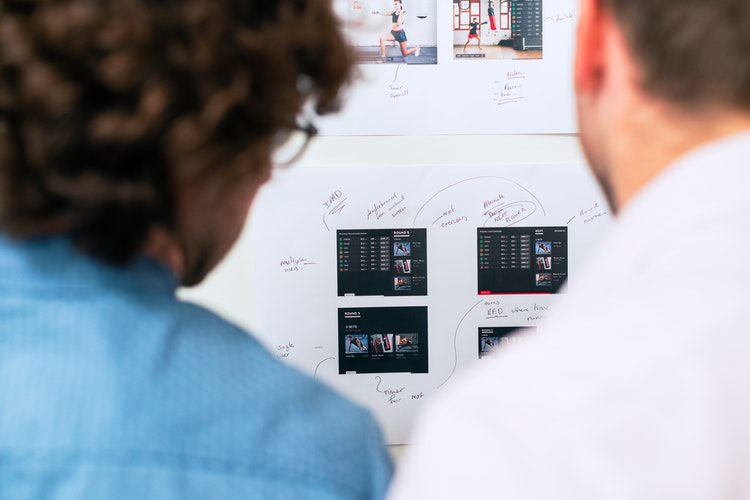 5 Steps to Take Before Calling an App Development Firm

There are a few critical steps that need to be checked off with regards to your app idea before calling or engaging with any app developer.

If you have done the above, and know the answers to each, you’re ready to engage with an app development firm (like us). If there are any unknowns or outliers for you in the above list, I highly recommend you check those off prior to engaging with a software firm.

Let’s expand on each step in the above list.

Study and Understand the Competitive Landscape

Your competitive landscape is one of the first things to understand. How are your prospective clients currently solving the problem your app purports to solve? Are there competitors already in the space?

Often, we get excited if there are no competitors. A whole market, just for me! But if nobody is doing what you’re aiming to do, that can be a red flag. Is there a huge blocker (or blockers) you’re unaware of? Scroll back up to the fire code example I outlined above, as an example.

If there are multiple or even a single competitor doing what you hope your app will do, what is your unique value proposition? What will differentiate you? How do you convince someone to switch to your app?

And don’t say quality or customer service. Everyone says that.

In line with the competitive landscape comes the identification of blockers, and understanding the general feasibility of the idea. Remember, feasibility can be contextual to your skill set, resources, funding, and the like.

Scroll back up to the Instacart competitor idea. How feasible would it be for one person to accomplish all the non-technical sides of that model, fund the app build, and take over a competitive share of the market?

What about technology? Does the general technology exist to accomplish what you want? You don’t need to have all the nuts & bolts answers – that’s part of the reason you hire a firm like Paper Leaf. But, at the risk of being silly, if you want to build a teleportation app you’re gonna have a hard time.

I get that you want to understand “how much an app costs” prior to sorting out how to fund the project. In my experience, though, those kicking around early-stage app ideas vastly under-estimate the budget required to bring their app to market.

Note that language – bring the app to market – because I chose it precisely. There are multiple pieces of the puzzle outside of the building software part. You’ll need to know how are you paying for common startup costs, like:

In the Guide to Funding & Monetizing Your App, which you can download for free below, I provide some ballpark ranges of what to expect for costs like the ones listed above. These costs, though, are widely variable depending on your skills, your network, your partners (if any), the complexity of your app and business model. For example, if you or your partner have a graphic design background, perhaps you can tackle the visual identity, marketing assets, and even some product UI costs with your own sweat equity.

Alternatively, if you’re a technical founder, you might be able to handle back-end development or infrastructure, and only have to hire out UX/UI and the other items that aren’t in your wheelhouse.

All of this is to say: the cost to bring your app to market varies widely, dependent on the above variables. You might be able to do it for next-to-nothing if you can call in a bunch of favours, have a simple idea, and have some chops yourself. Alternatively, it could quite possibly cost millions on the other end of the spectrum, if your idea is complex and requires considerable person-power, innovative technology, and large advertising spend to compete for attention and acquire users.

I go into much more detail about funding, including various options for funding and the pros/cons of each, in the Guide to Funding & Monetizing Your App, which you can download for free below.

A Guide to Funding & Monetizing Your App

Wondering what your options are for funding your app idea? What about monetizing it? From various funding models to the most common monetization strategies, the Guide to Funding and Monetizing Your App has the answers you're looking for. If you're curious to know what works and what doesn't, plus get some actual cost ranges for 5 common startup costs, make sure to download this free PDF.

Rough out the Go-to-Market and Customer Acquisition Strategies

I’m not saying you have to have a humongous, step-by-step plan for taking your app to market, or acquiring customers. That’s hefty work usually reserved for someone with a product or marketing background, so it’s okay to expect help on this from whomever you end up hiring if that’s not in your wheelhouse.

That said, I generally recommend you have at least a high-level idea for how you’re going to bring the app to market alongside a rough draft of a customer acquisition strategy. Acquiring users is one of the 3 critical items people forget when building their new app, and no matter what Field of Dreams told you, if you build it they’re not just gonna come. There needs to be strategy, effort, and dollars put into acquiring those users.

Have a Monetization Plan

And, maintaining software and its infrastructure costs money too. It’s another one of the those critical items people forget when building their new web or mobile app.

So, that begs the obvious question: how will you make money from the product? (Please don’t say ads.)

Your monetization model – does it have the potential to exponentially outpace costs?

Monetization strategies can get complex, and sometimes hard to unwind from customer acquisition/go-to-market strategies. For example, if part of your strategy is to go freemium alongside app store SEO and a subscription fee model, you’ll need to factor in:

From there, you can play with models to sort out X downloads you’ll need to get at Y subscription fee in order to hit Z revenue.

Like I said, this is just the tip of the monetization iceberg. I go into much more detail, with some examples of models to derive download goals to achieve revenue targets, in the Guide to Funding & Monetizing Your App, which you can download for free above.

I know that “move fast and break things” is some sort of credo to abide by in tech circles. And, on some level, I subscribe to it – push boundaries, ship quickly, and the like.

But that doesn’t mean you should jump right into a contract and build your app. By following these steps, you’ll be able to move efficiently, not recklessly, towards validating and then launching your next big idea.